The Eighth Regiment of the Illinois National Guard is said to have started as the volunteer Hannibal Guard militia in the year 1871. They later became a division of the Illinois National Guard and was organized during the Spanish-American War of 1898 as an all-Black volunteer regiment. Called the "Fighting 8th" infantry, the regiment served along the Mexican border in 1916 and in France under Colonel Franklin A. Denison during World War I, when the regiment was incorporated into the 370th U.S. Infantry.

The Fighting Eighth gained special recognition as the regiment that finally drove the German forces from the Aisne-Marne region of France prior to the Armistice in 1918. Under the leadership of Brigadier General Richard L. Jones, the 370th Infantry Regiment was awarded 71 War Crosses with special citations for valor and merit and 21 Distinguished Service Crosses. General Jones was awarded the French Croix de Guerre for valor in battle. 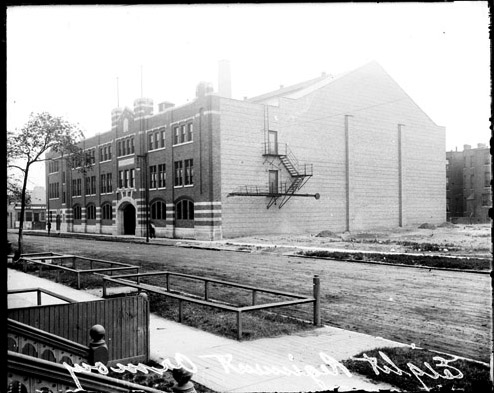 Fighting On Both Fronts: The Story of the 370th. CLICK TO SEE VIDEO!

The Eighth Regiment Armory was originally headquartered in what has been described in the literature as a "stable" at the corner of 35th Street and Forest Avenue in Chicago. This facility was inadequate for military purposes and a new armory building was completed in 1915 after petitions were circulated in the Illinois legislature for a new armory.

This was the first armory built for an African-American military regiment in the U.S.  It was intended for both military and community use. It became the site of numerous neighborhood meetings and social functions within the Black Metropolis-Bronzeville District in the Douglas community area of Chicago. A notable event at the armory includes a speech and rally in 1919 by Marcus Garvey, founder of the United Negro Improvement Association.

The avenue where the armory presides was named in honor of Lt. George R. Giles, the regiment's highest ranking officer to be killed in the line of duty. The armory closed in the early 1960s and re-emerged as the South Central Gymnasium. After an extensive renovation it was reopened in 1999 as a Chicago public high school. The building is listed on the National Register of Historic Places. It is located at 3533 S. Giles Avenue in Chicago, Illinois.

The Victory Monument in Honor of the Fighting Eighth

The Victory Monument was erected in 1927 to honor the Black war soldiers of the Eighth Regiment. The design of the monument was developed by French-born sculptor Leonard Crunelle, a former pupil of noted Chicago sculptor Lorado Taft. The sculpture has three panels. One panel depicts a Black soldier, another a Black woman, and the last panel depicts the patriotic figure of "Columbia" holding a tablet where the locations of the regiments major battles are recorded.